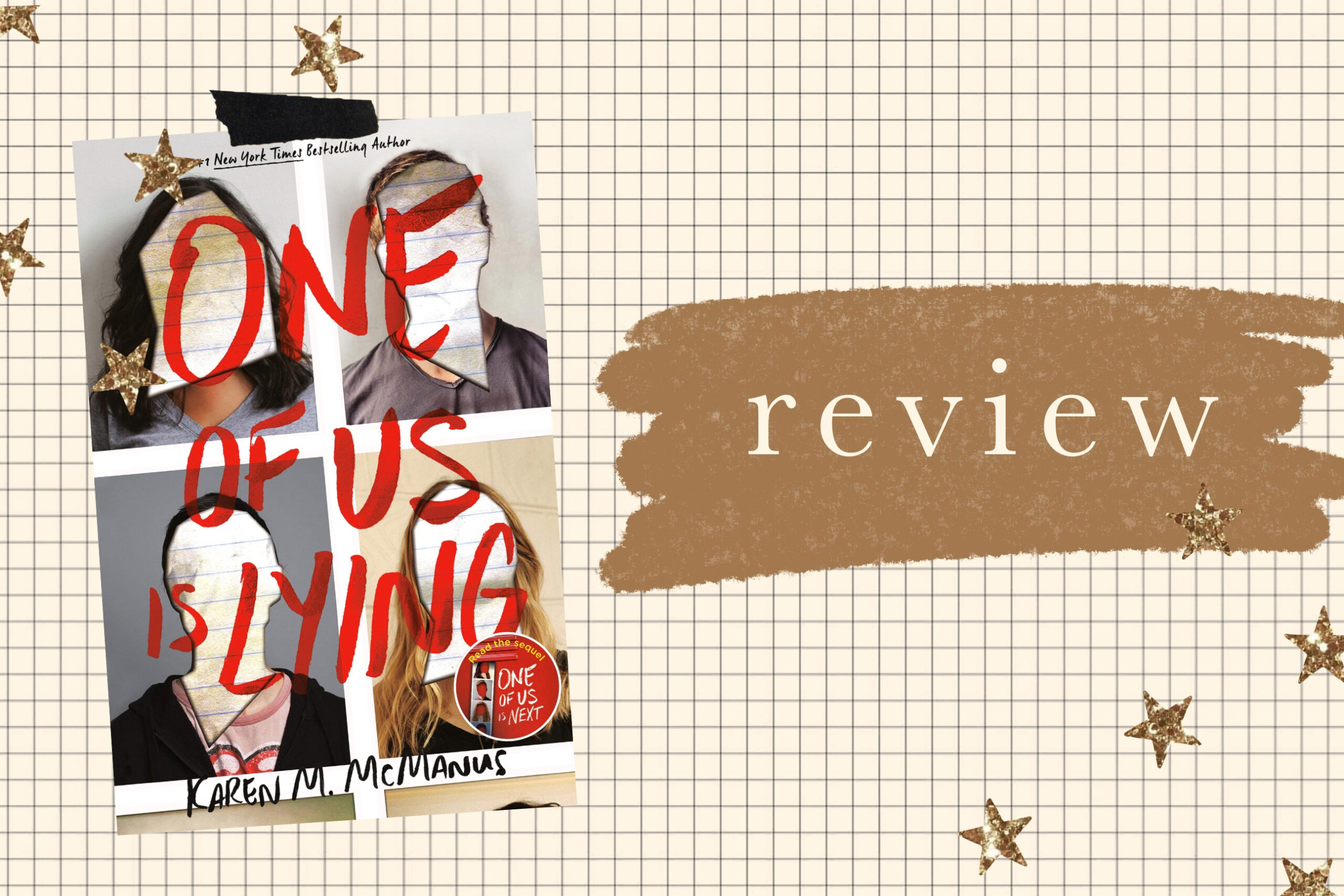 title: One of Us Is Lying

I’ve been feeling so slumpy lately and this was a classic case of the right book at exactly the right time! The last couple of books that I read were not very happy-go-lucky (not that this one is necessarily…) so this was quite a fun change of pace.

This book is described as the breakfast club meets pretty little liars and that is exactly what I was thinking the whole way through! The story revolves around five teenagers who, by chance, end up in detention together but only four of them leave the room alive… The rest of the book is spent figuring out what really happened.

Bronwyn is the first character we are introduced to in this book and I quite enjoyed reading from her perspective. She is smart and takes charge of everything around her. She can be bossy but in an admirable way (in my opinion) but also has a soft side, especially when it comes to her younger sister Maeve. Their relationship was lovely to read about and felt very realistic.

Honestly, I thought Cooper was a rather boring character until around halfway into the book. I had already bonded with all the others but Cooper just seemed so forgettable to me. Out of all the privileged kids, he was the worst in my opinion. He’s such a nice guy that no one even believes he would ever be capable of doing something bad, when they don’t hesitate to point fingers at the others. But he grew on me in the end.

Nate is probably the opposite of Cooper in my mind, I usually tend to gravitate toward bad-boy characters and I did in this book as well. I rooted for him from the very beginning but started to get bored of him towards the end. Some of his actions kind of rubbed me the wrong way and I felt myself caring less about his chapters.

Oh my god! Addy was by far my favourite of the main characters! In the beginning, I disliked her a lot but I feel that out of everyone, she developed the most as a character and I loved seeing that progression. She went from being very passive to taking control of her life and I applaud her for that!

When I think about what I liked in this book, many things come to mind. First let me start off discussing the pacing. The biggest issue I usually have with mystery like this one is the pacing, the author will either drag it out way too long or get to the point so quickly and skip all the suspense. McManus however, was right on the nose with the way the story unfolded. I think partly due to the multiple perspectives which she navigated masterfully. I never felt like I got too little or too much of one persons perspective and the constant switching kept the story fresh and me on edge.

Secondly, I would like to applaud McManus for the character development in this novel. With this many main characters, it can be hard to clearly differentiate their personalities and tone-of-voice, but after only a few pages I already felt well-acquainted with them. At the end of the novel it was like they were people in my own life whom I had known for years.

Thirdly, the realism of it all. Part of why I felt like I knew the characters so well is because not only they were fleshed out, but their families as well. All the characters and setting felt real and three dimensional.

Lastly, the final reveal! I did not see the plot twist coming at all, yet it totally made sense. All the loose ends are tied up and as a reader, I felt a great deal of satisfaction at the surprise of it all.

Now that I have gushed enough about this book, I have to share my one main dislike concerning this story and that is the romance. Usually I am a big fan of romance, especially in a book like this seeing as it kind of breaks up the tension of the mystery. But the romance between two of the main characters felt very rushed and slightly unnatural at times. They also started to act really out of character when they were together which really bugged me.

Overall, I thoroughly enjoyed this book. It really surprised me, as I didn’t really have any expectations going into it. It was a fast read and nice to read in between heavier books. Would recommend if you are looking for a fun YA high-school mystery.

by lottemarleen
Leave a Comment
previous article: The Reading Rush 2020 – Wrap Up